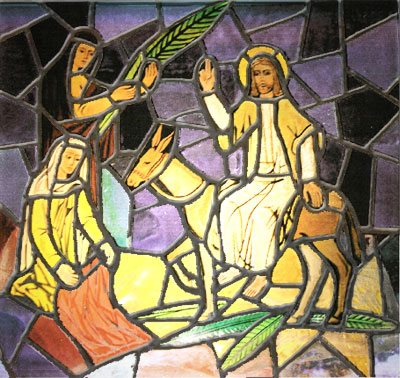 When they were approaching Jerusalem, at Bethpage and Bethany, close by the Mount of Olives, he sent two of his disciples and said to them, ‘Go to the village facing you, and as you enter it you will at once find a tethered colt that no one has yet ridden.  Untie it and bring it here.  If anyone says to you, ‘What are you doing?’ say, ‘The Master needs it and will send it back here at once.’  They went off and found a colt tethered near a door in the open street.  As they untied it, some men standing there said, ‘What are you doing untying that colt?’  They gave the answer that Jesus had told them, and the man let them go.  Then they took the colt to Jesus and threw their cloaks on its back, and he mounted it.  Many people spread their cloaks on the road, and others greenery which they had cut in the fields.  And those who went in front and those who followed were all shouting, ‘Hosanna!  Blessed is he who is coming in the name of the Lord!  Blessed is the coming kingdom of David our father!  Hosanna in the highest heavens!  He entered Jerusalem and went into the Temple; and when he had surveyed it all, as it was late by now, he went out to Bethany with the Twelve.  (Mark 11:1-11, NJB)

A Few Thoughts Disguised As Questions

A Prayer Appointed for the Day

Assist me mercifully with your help, O Lord God of our salvation, that I may enter with joy upon the contemplation of those mighty acts, whereby you have given us life and immortality, through Jesus Christ our Lord.  Amen.