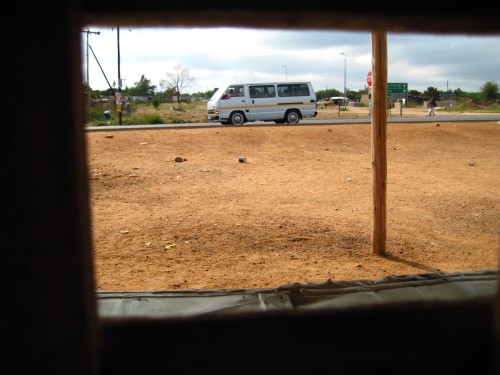 Pumping classic Marvin Gaye to the latest in township house over crackling speakers.

Last July I had just finished a morning spent shadowing Petunia Kabongo and a few of her hospice care workers all over Block X in Soshanguve (the local township 20 minutes outside Pretoria) to get a feel of their daily work in caring for HIV/AIDS patients through their home-based care NGO, when I suddenly realized that we were far from the Kabongo’s house in Block HH and we would need to catch a taxi back home.  I looked in curiousity at Petunia (whom I have just begun a group spiritual direction ministry with this past week, for those same care workers) and wondered how are we ever to find our way back home?  There seemed to be an indiscernable series of hand signals that formed some sort of language between would-be passengers on the side of the road, and honking taxi drivers trolling for fares throughout Soshanguve.

A few minutes later we climbed into a taxi (having made a circle-shape for ‘Take me to Mabopane train station,” which is the major stop for most taxi routes in the township), and I found myself crammed into a Vanagon-style bus with 14 other passengers.  Petunia sat up front (likely to escape the crushing feeling and musical chairs-style game of shifting seats to let out the person in the back of the Kombi) and promptly asked the driver to turn on some music.  He obliged her, blasting the Marvin Gaye classic “Let’s Get It On!” through crackling speakers, which Petunia proceeded to attempt to sing over!  Dying with laughter (and the crushing feeling of my own rib cage pressing in on my lungs), I experienced my first taxi ride in the township.

Fast forward to just now, and I find a hilarious message from my friend Eden Broggi on my Facebook wall, in which she writes: “When you get back to Sutra** you’ll feel right at home…” and proceeds to link to this amazing CNN.com story. Enjoy a clip:

For discerning clubbers around the world the hottest sound in dance music right now is coming not from New York or London, but from the townships of Pretoria, South Africa.  DJ Mujava’s “Township Funk” became the surprise global club anthem of last year, an instant favorite on dance floors everywhere, with its ear-popping mix of incessant, driving snare drums and retro electronic noises. Its distinctive sound is part of a larger scene known as Township House that comes straight from the townships of Pretoria. But its improbable journey to glitzy superclubs around the world may never have happened without the help of South Africa’s taxi drivers.

South Africa has long been a voracious consumer of imported European House music, but over the last few years a small group of producers in Pretoria have begun experimenting with their own sound, more representative of the music of the townships they live in. They came up with a style that mixes the raw beats of the South African hip-hop style called Kwaito with House music’s tempos and electronic sounds.

But the problem for the Pretorian producers was getting their music heard. Neither the radio stations nor the big record labels in South Africa were interested in their rough-and-ready sound — so the producers decided to go directly to the public.  DJ Qness writes for South African dance music magazine BPM and works for Mujava’s record label, Sheer Music. “In South Africa, the easiest way to the people is through the taxis,” he told CNN.

South African taxis are actually small mini buses and are by far the most popular mode of public transport in a country where car ownership is limited. A Pretoria University study estimates that between five and 10 million South Africans use taxis every day.

The Township House pioneers began to give CDs of their tracks to taxi drivers. The drivers played the CDs to a captive audience of commuters and the response was incredible. Passengers wanted to know where they could buy the tracks they were hearing, and with no record stores stocking the music, taxi drivers began selling CDs directly from taxi ranks and roadside stalls.

Amazing on so many levels.  Are taxis the Twitter of the masses here in South Africa?  One can only hope…

**Note 2: Sutra is a sketchy dance club in the dying Triangle Square region that apparently Brittany Spears once frequented in her ‘less glamorous period.’