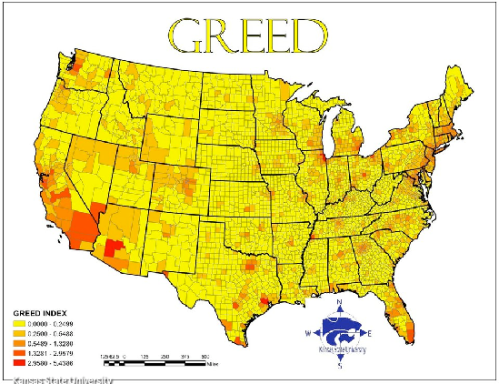 Fascinating/Disturbing that I have lived in the center of Greed, Inc. much of my life.

Geographic Researchers from Kansas State University recently began a nationwide study of the Seven Deadly Sins through a fascinating (if not equally disturbing) mathematical aggregate that they applied to each of the seven deadly sins of greed, envy, wrath, lust, gluttony, sloth, and pride.  Here’s a clip that shows how they calculated each ‘sin:’

Greed was calculated by comparing average incomes with the total number of inhabitants living beneath the poverty line.

Wrath was calculated by comparing the total number of violent crimes — murder, assault and rape — reported to the FBI per capita.

Lust was calculated by compiling the number of sexually transmitted diseases — HIV, AIDS, syphilis, chlamydia and gonorrhea — reported per capita.

Gluttony was calculated by counting the number of fast food restaurants per capita.

Sloth was calculated by comparing expenditures on arts, entertainment and recreation with the rate of employment.

And pride, lastly, is most important. The root of all sins, in this study, is the aggregate of all data. Vought and his Kansas colleagues combined all data from the six other sins and averaged it into an overview of all evil.

While their means of determining each sin raises a ton of questions, what’s even more intriguing is their results mapped out throughout the United States.  I’ve uploaded the .jpeg file for ‘Greed,’ as this is where the Southern California area stands out the most.  Interestingly, gluttony is greater in the South (particularly Texas), and wrath is high throughout the Southeast (particularly Florida).

What implications does this have for us as human beings, and for the church at large? I would be fascinated by your thoughts…