We're in the Finals. My team needs the obligatory Stars & Stripes shot!

So, I am heading to the Confederations Cup Soccer Final right now in Johannesburg, which improbably features a rematch of USA v. Brazil tonight in a game that no pundit would ever predict even 7 days ago, when the US overcame impossible odds to shock Egypt 3-0, while simultaneously needing Brazil to destroy Italy 3-0 to even reach the semifinal round of this tournament.  Not only did that happen to the delirium of the US fans in our community, but I had the privilege of sitting directly above the goal that Brazil scored 3 goals in 8 short minutes in during the Brazil/Italy matchup (which was INSANE!).

Wednesday night all of the men in our community (and Colletta, who comes now as a default partner with Doug!) gathered in front of the TV, guessing how badly we would lose to Spain, the current #1 ranked FIFA team in the world, who hadn’t lost in 35 matches (!), dating back to November 2006, who were the current European champions (no small feat in and of itself), and who hadn’t even allowed a goal to be scored against them since early April of this year (over 451 minutes of match play!).

And we scored!  And we scored again!  And Spain kept missing shots, or we would block their strikers at the last possible second.  WHAAAA?  Was the unthinkable happening?  (NO!  Don’t jinx it…).

We SOUNDLY defeat Spain 2-Nil in one of the largest soccer upsets in FIFA history, dethroning the current champions and sending shockwaves rippling around the world, propelling us into our first ever FIFA final of any type, setting up the rematch of the ages.

(Now, in my cynicism, I still think Brazil will destroy us, particularly since we left everything on the field Wednesday night…but man, hope is a tricky beast sometimes…)

So, stop what you are doing, fickle US fans, and sit in front of ESPN 2 (if you have cable) or ESPN360.COM (if you don’t) SUNDAY AT 11AM PST, and jump on the bandwagon…I’ll be at the game LIVE, and will post further thoughts and pictures regardless of how badly we lose.  For now, enjoy these:

Vuvuzelas have shown up in mass. The peaceful sound of a 1000 elephant deaths. 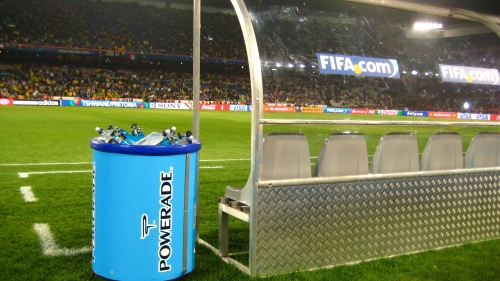 I can't believe how close I could get for these shots. A few meters at max!

Lining up my shot. Imagining I was actually standing ON the field.

Football brings out a whole new level of passion, it seems.