I haven’t been able to find adequate words yet to describe my experience this past week in Soshanguve, and actually in fact have felt overwhelmed and drained with the implications that are building in my experiences so far through this apprenticeship.  More is coming, but here’s some of what I’ve been chewing on recently:

Do I have friends who are poor? (My friend and local pastor, Tom Smith)

I set out to see poverty in India and came face to face with poor people.  Despite my good intentions to personally observe and respond in India, I was at best a ministry tourist.  Equally important, I had not acquired this knowledge from the poor themselves.  I had not submerged myself as Jesus had submerged Himself in our world through His incarnation.  Good intentions, I have found, were not enough. (John Hayes, Submerge, p. 47).

There is hope for the rich, insofar as they act and serve in solidarity with the poor and oppressed.  In their being converted to God, rich and poor are converted toward each other.  Their main emphasis, ultimately, is on sharing, on community. (David Bosch, Transforming Mission, p. 104)

The concept of neighbor can no longer be solely geographical.

Township walls are textured contrasts in beauty. Lawrence, my host in Soshanguve, posing like a star.

Does the fact that the amazing corn I was served was found directly next to the Outhouse have anything to do with its goodness? 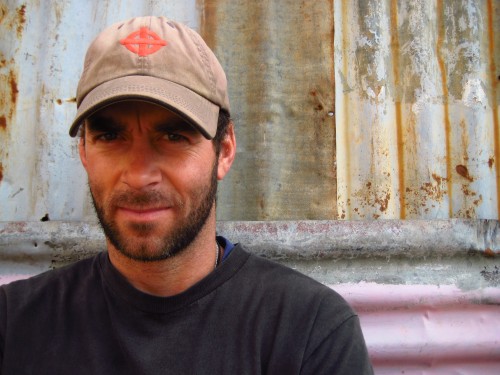 Tony, looking kind and calm. Don't be fooled-He could fold me like a pretzel through his MMA training! 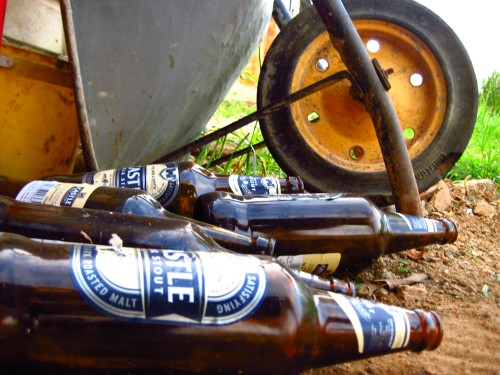 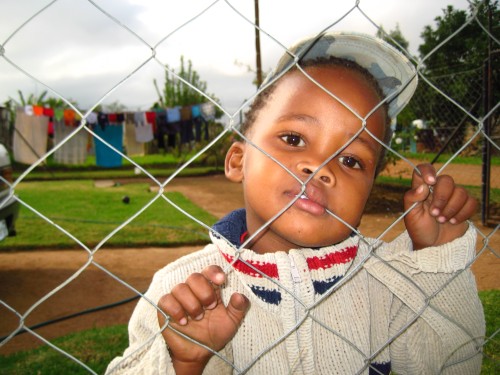 My fascinated next-door neighbor would stare at me each morning. Bet he hasn't seen skin as pink as mine before! 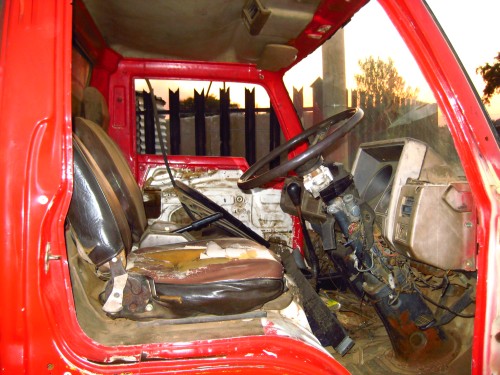 Gutted semi-truck cab parked on a street we strolled down.

Busi and Colletta rocking it hardcore, as always!

Oupa, my roommate, NOT waiting for the bus. He has nicknamed me 'Bafana!' 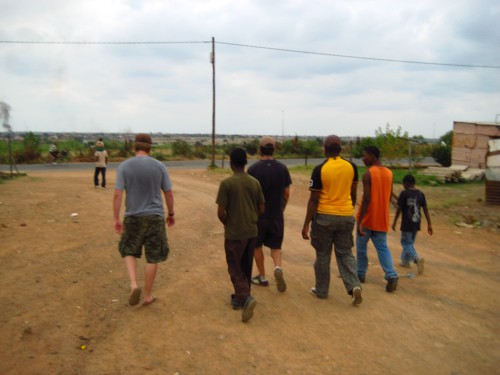 The other main activity of our time in Soshanguve. Walking with the boys.

Granny's Family (and likely, my host home) in Soshanguve, the local township near Pretoria North.

Sub-merging [is] going beneath the surface of a consumer society’s demands and aspirations and finding life with Christ among the poor…Cities exert disproportionate influence in shaping twenty-first century culture.  As author and teacher Ray Bakke observes, cities operate as magnets that draw in the world’s people and as magnets that “breathe out” urban culture everywhere as the desirable norm…[We are] unprepared for and unaccustomed to the pressing level of urban poverty.  Nearly 1 billion people in the world, one-third of urban residents, live in slums.  Even more alarming, slum populations are growing faster than any other demographic sector.  More than ever, seeking the welfare of cities means being prepared to seek the welfare of the poor (John Hayes, Sub-Merge, pps. 14-16).

I am writing this in the middle of the night (literally) Monday morning, a few hours before I need to wake up and begin my 11th (!) week of life, mission, and service here in Pretoria, South Africa.  I’m up mainly because I just spent a few precious moments on Skype (bless all technological geniuses!) with my family (Hello Gerdts’, Linda, Woods, Fullmer’s, and of course, Kamalski’s) as they gathered for a Southern-style Easter.  But I’m staying awake a few minutes as I feel the Spirit beginning to shift my heart towards the major experience of these next few days, namely that of submerging into, and living with, friends of our community who stay in Block KK of Soshanguve.

I haven’t written much about ‘Sosh’ yet, and frankly, don’t intend to at this juncture either.  Soshanguve is the local (one of many, and encompassing a much larger urban sprawl outside of Pretoria) township about 20 minutes outside of Pretoria.  South African townships, in the most general sense, were former areas in which the urban (largely black) poor lived, often near Afrikaaner or British South African (white) suburbs/cities.  Think of them as complex slum/rural/poor neighborhoods, although that generalization isn’t entirely helpful either, as there are nice portions of the township as well, and many of the Blocks in Soshanguve have running water, sewage, and electricity (although these ‘features’ may be somewhat different from modern, ‘Western’ ideas of adequate services).

Do think size though.  In an impossible estimation, most people consider between 1 to 1.5 million people to live within Soshanguve.  I’ve posted previously about my experience in Soshanguve participating in the funeral services for my roommate Johannes’ brother.  I simply can’t do justice to the immensity of need, human life, and activity that pulses through Soshanguve (and the innumerable similar townships in every major urban center worldwide, including areas within California that we would potentially call ‘urban ghettos (I don’t like the stereotypes associate with this name):’ East Palo Alto, East San Jose, The Tenderloin, Compton/Watts, Santa Ana, portions of Riverside.  What has been humbling to consider are two diametrically opposed factors: Our world is much different than the world I typically inhabit, and my reality often prohibits me from even being able to see with honesty how others live. I don’t write this in a judgmental fashion (either upon myself, or on the ubiquitous category of ‘others,’), and yet I wish to learn, grown, and open my eyes to the wider world (even to our ‘neighbors’ nearby in Sosh).

In an effort to open our eyes, our apprentice community will be spending the next three days living with our friends out in Soshanguve.  We have no ‘purpose’ other than to simply ‘be with’ our friends, living life as normally as possible with them.  We will (try and) help them cook, clean, run errands, tidy the house, and travel with them to complete their daily business.  We’ll sleep in their homes, share meals (and the post-meal dance party!), and communicate as best as we possibly can.  We’ll be treated as royalty, as hospitality is a deep art form throughout South Africa, particularly within the township.  We’ll be uncomfortable at times, we’ll stick out like sore thumbs, and we’ll be exposed to our own sense of well-being, warts and all.

I expect these next 48 hours to be profoundly impacting, and hopefully a taste of what true incarnation (living with and among) looks like.

More to come, and prayers would be coveted! 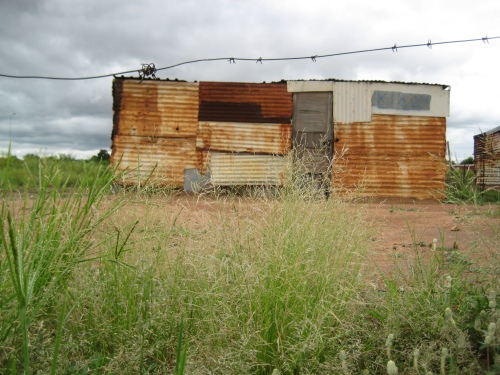 Granny's neighbors across the street in Block KK, Soshanguve.